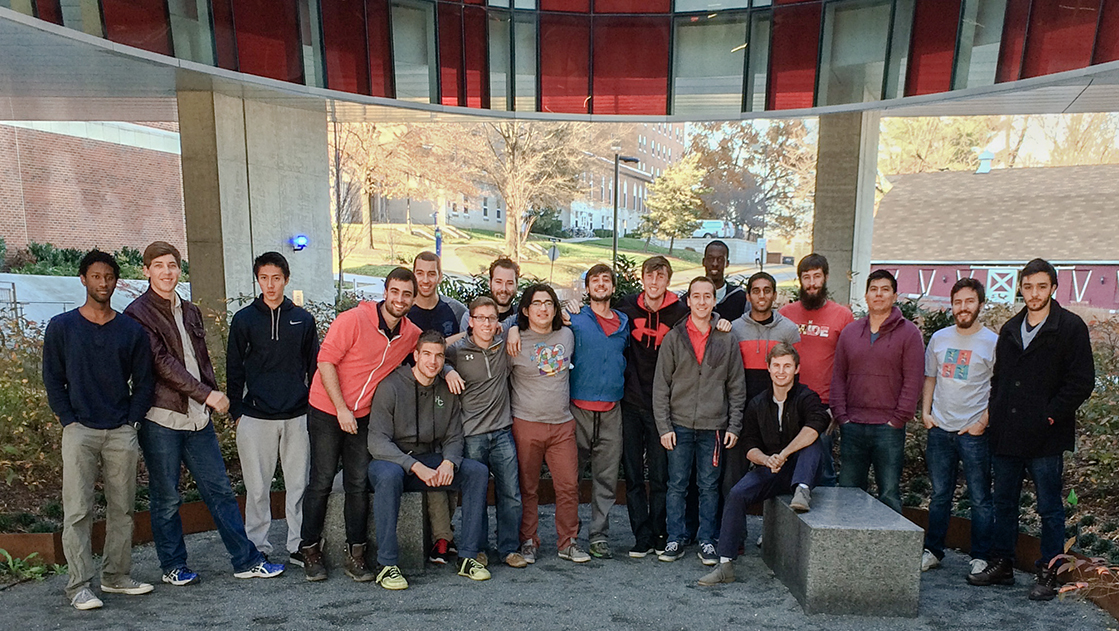 A University of Maryland (UMD) led team is heading to the SpaceX Hyperloop Pod Competition Design Weekend held at Texas A&M University in College Station, Texas January 29-30. The team, which has combined forces with students from Rutgers University, represents one of 124 student engineering teams from 27 U.S. states and 20 countries that were selected from over 1,200 initial proposals.

SpaceX and Tesla Motors co-founder Elon Musk first proposed the Hyperloop, a high-speed ground transport concept, in 2013. In the Hyperloop, passengers could travel from Los Angeles to San Francisco—some 382 miles—in under 30 minutes, radically transforming the speed and safety of passenger mass transit. SpaceX's Design Weekend is a preliminary competition for students to encourage innovation and challenge them to design and build the best Hyperloop transport Pod.

Mentored by University of Maryland Department of Fire Protection Research Associate Noah Ryder, the multi-disciplinary team includes more than 25 students from UMD’s A. James Clark School of Engineering and College of Computer, Mathematical, and Natural Sciences, and several students from Rutgers University who are heading up the team's electronics system efforts.

"As a faculty member and former UMD student it is great to see an opportunity like this come up for the students," said Ryder, who has also been invited to serve as a Design Weekend judge. "It gives them a genuine, once in a lifetime chance to participate in a project with massive potential ramifications, on a world-wide stage and in a highly compressed time-frame."

At Design Weekend, the teams will present their concepts to a panel of SpaceX, Tesla and university judges for a chance to build and test their design prototype at the world’s first Hyperloop Test Track being built by SpaceX adjacent to its headquarters in Hawthorne, California. The final phase of the Hyperloop competition will be held in summer 2016.

The UMD-Rutgers team was the culmination of efforts by UMD aerospace engineering undergraduates Kyle Kaplan and Neel Patel. Both students actively work on other design/build projects in the Clark School of Engineering, such as the NearSpace Balloon Payload Program, and both had a long-standing fascination in both Elon Musk's work and the Hyperloop project. When SpaceX announced the Hyperloop design challenge, according to Patel, it was a "no brainer" to field a team.

"We enjoy the hands-on design and build aspect of engineering," explained Patel, who is also the systems team lead. "The competition gives us the opportunity to do the hands-on work we love on a larger scale."

The project also offered an opportunity to tackle a design project no one else has attempted.

"Hyperloop has the possibility to transform transportation for humans everywhere," added Kaplan. "The Hyperloop competition is unique, because while it is a hands-on engineering design project like so many others, it also has never been done before. This project is an opportunity for me to participate in something bigger than myself."

The competition pod prototypes are scaled-down versions designed to operate on SpaceX's aluminum plate and rail test track. The model the team proposes to build will be approximately 3 feet by 9 feet and weigh about 1200 pounds. If successful, the pod will be capable of safely reaching speeds of 212 miles per hour.

To address the many challenges in designing and building a complex prototype, the team is leveraging student expertise from across disciplines.

"Different backgrounds bring different insights and perspectives," said computer science major Paul Garvey. "By having such a diverse team, we can pursue different avenues based on our expertise to arrive at some pretty creative solutions."

Garvey, who interned with Johns Hopkins University's Applied Physics Lab (APL) working with scramjet research, is bringing both his experience from APL along with his math and physics background to the support the team's aeronautics efforts. For him, the project offers a wealth of possibilities.

"There is no working Hyperloop prototype, there are no guidelines, there is no right or wrong and we have the opportunity to directly impact the future," explained Garvey.

While the challenge may seem daunting to some, the team is already bringing cutting-edge technology to their design solution. One of the team's key design approaches is to leverage relatively new-to-market technology from Arx Pax that would enable their pod to hover on the track—think Back to the Future hover board technology—rather than the air-bearing skis Musk described in his original Hyperloop paper.

"For many of us, this is our first taste of the scale of work we will face as future engineers," added Patel. "Working on something like this as students is a valuable way for us to hone our skills and pick up new ones. We can make the mistakes and learn from them now to bring a level of experience to our future careers."

With a promising prototype, the team aims to garner industry attention during Design Weekend. In addition to presenting their proposed designs to a panel of judges, the two-day event also offers them the opportunity to engage with industry experts and potentially land sponsorships that would support the costs of building the physical prototype.

"Competitions like this are important because they provide students a special way of interacting with the industry," Patel added. "Students can take part in what is often a new and developing technology that otherwise they may not be able to work with."

And if the team succeeds in building a successful prototype that makes it the test track in California?

"I want to be proud of the work we did on this project," said Patel. "And be excited to share with employers, and people in general, that our team helped make Hyperloop a reality."

For more information on the University of Maryland Team visit rumdloop.com. To support their fund raising efforts to cover the cost of attending Design Weekend, visit go.umd.edu/gofundrumd.

For more information about the event, visit http://engineering.tamu.edu/hyperloop and www.spacex.com/hyperloop.