Plasma is known as the fourth state of matter.  It is the basis of some of the most spectacular phenomena in nature. The violent spark of lightning, the ghostly luminescent Northern Lights, the cosmic interplay of colors in a nebula, and even the burning brightness in the core of every star—all have their origin in plasma. In fact, plasmas are the most common form of matter in the universe! Plasma's intense, otherworldly glow seems almost supernatural. However, plasmas contain underlying physical concepts. A plasma is a gas that is heated to the point that the individual gas particles break apart into a collection of positively and negatively charged particles. The distinct glow of a plasma is created by the occasional recombination of positive and negative charges that produces an emission of light with a color determined purely by gas chemistry. 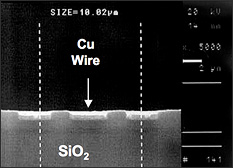 Plasmas can be used to deposit or remove material in a controlled way making possible intricate patterns on a wafer of silicon. Since each charged particle in a plasma is created from a molecule or atom, the patterns created can be the size of a few molecules or atoms. In this way, vanishingly small electronic devices and circuits can be put on a piece of silicon making a computer chip. Plasma processing helped make the copper wiring pattern pictured here. The area pictured here could fit inside the diameter of a single strand of human hair. Plasma-aided fabrication is an integral part of electronics and semiconductor manufacturing. It is used in the manufacturing of everyday devices such as computer processors, RAM, hard drives, monitors, television displays, and solar cells. Progress in plasma research has proved essential to the rapid miniaturization and increased performance of electronics.

Continuing developments in plasma processing will help bring future devices, such as flexible displays and solar cells, DNA microarray chips, holographic memory, and quantum computers, from concept to reality. However, certain issues must be addressed to continue shrinking the size of chips and advance technology. The energetic environment in a plasma chamber can cause damage to chips being made. Currently, electronic devices and circuits have become small enough that roughening caused by plasma-aided fabrication can cause defective chips and overheating.

Plasma for Disinfection of Surgical Instruments and Wounds:  A study that sought to explain how and why plasma is so effective at deactivating toxic proteins and biomolecules could lead to its broader use in the medical community. The project, a unique blend of plasma science and bioengineering, was first to explore the mechanistic effects of plasma on bacteria at the monolayer level. More...

Professor Gottlieb Oehrlein and his research group at the Laboratory for Plasma Processing of Materials are researching how different plasma processing conditions affect the roughening of electronic components on a silicon chip. What they learn could help prevent damage during the manufacturing process and defective products.

Watch a materials video about plasma:

Plasma: The 4th State of Matter
Plasma is widely considered to be the fourth state of matter due to its unique properties. Plasma is a gas in which the atoms are ionized, meaning there are free negatively charged electrons and positively charged ions. This collection of charged particles can be controlled by electromagnetic fields and this allows plasmas to be used as a controllable reactive gas. The electronics industry uses this concept to etch very small patterns into silicon to make our modern day devices smaller and more efficient.

This movie was produced by students Bobby Bruce and Michael Sweatt, with support form the National Science Foundation, for the 2008 Vid/Terp competition. 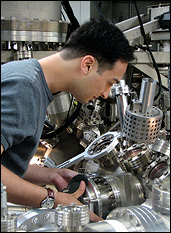 A student doing experimental work using a plasma reactor in the Laboratory for Plasma Processing of Materials.