A ceramic is a material that is neither metallic nor organic.  It may be crystalline, glassy or both crystalline and glassy.  Ceramics are typically hard and chemically non-reactive and can be formed or densified with heat.  Ceramics are more than pottery and dishes: clay, bricks, tiles, glass, and cement are probably the best-known examples. Ceramic materials are used in electronics because, depending on their composition, they may be semiconducting, superconducting, ferroelectric, or an insulator. Ceramics are also used to make objects as diverse as spark plugs, fiber optics, artificial joints, space shuttle tiles, cooktops, race car brakes, micropositioners, chemical sensors, self lubricating bearings, body armor, and skis.

From Digs to Dentistry: Mey Saied, an alumna of the MSE graduate program, used her expertise in ceramics to make better dental crowns while a student here at Maryland. She's also used MSE to study ancient pottery!

Metamaterials are composite systems whose properties are dominated not by the individual atoms, but by the properties of larger, artificially produced structures or "meta-atoms".  The most famous types of metamaterials are those in which the interaction with light is markedly different than in conventional materials: in some cases the index of refraction which determines the speed of light can even be negative-light bends in the opposite sense from common experience in these materials! Possible applications are invisibility cloaks, and aberration free lenses.

How is MSE working with composite (metamaterials)?

Most metamaterials gain their novel characteristics through the existence of resonances in the component artificial structures: these can be oscillations in the electron density or atom density which occur at some natural, tunable frequency. 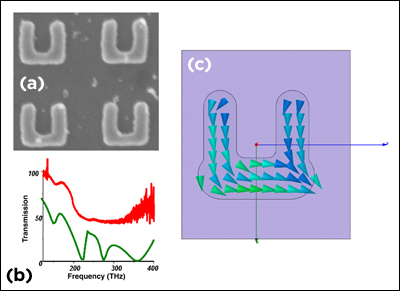 A good example of such a resonance occurs in small metal clusters, and is called a particle "plasmon": the sea of electrons can be made to swish back and forth with respect to the cluster of atoms; by immersing it in an oscillating electric field. The amplitude of the swishing will be very large if the frequency of the oscillating field matches the plasmon frequency, which is determined by the dielectric function of the metal and that of the surroundings, as well as the size and shape of the cluster. This is the origin of much of the brightly colored glass that is used in stained glass windows, by the way: adding metals to glass results in the spontaneous formation of nanometer sized clusters of metal which absorb light very strongly at their plasmon frequency.

Metamaterial structures based upon particle plasmons have important technological applications in enhancing the spectroscopic signature of nearby molecules, such as fluorescence and Raman scattering. In fluorescence a molecule is excited by absorption of light at one wavelength and relaxes by emission of light at a slightly longer, and characteristic wavelength. It is one of the workhorse techniques in biomedical assays, and is used in the detection of a number of important or potentially dangerous biomolecules including proteins, DNA and RNA. Work by Professor Ray Phaneuf and his group in has shown that by carefully choosing the size, shape and spacing of silver nanostructures and the type of substrate, that fluorescence can be enhanced by at least a factor of a few hundred, greatly increasing the sensitivity to small amounts of target biomolecules. 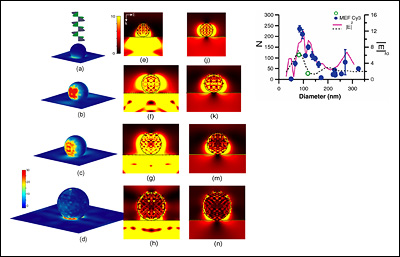 Figure 2. Electric field –squared in the vicinity of a silver nanoparticle on a silicon substrate (a-h) and on a glass substrate (i-n), under illumination by green light (514 nm wavelength). The particle diameters are indicated to the left. As shown in panel (a), the incident light propagates downward and the polarization of the E-field is parallel to the substrate (colored in green). Panels (e), (f ), (g) and (h) are cross sectional renderings of electric field -squared for particle diameters of 60, 100, 120, and 210nm, respectively; panels (j), (k), (m) and (n) are cross sectional renderings of the electric field –squared for the same particle diameters, but on a SiO2 substrate. To the right is a summary of the enhancement in fluorescence and average field squared at the dye molecules from a green fluorescent tag coated onto the nanoparticles and substrate as a function of particle diameter for the Si substrate (blue dots and pink line respectively) and for the glass substrate (green circles and dotted line, respectively. (From: S.-H. Guo S.-J. Tsai, H.-C. Kan, D.-H. Tsai, M. R. Zachariah, and R. J. Phaneuf Advanced Materials 20, 1424 [2008])

MSE professor John Cumings and his research group are out  to thaw the mysteries of ice (yes, something so common can be mysterious) and a Law of Physics could need to change based on the results! Learn how a metamaterial called "artificial spin ice" is involved.

Our metamaterials work is considered some of the best there is! Recent publications by Professor Ray Phaneuf and his research group have been featured in special compilations that keep materials scientists informed of cutting-edge and state-of-the-art research. You can read more about their discoveries here and here.

How can we create planes that are so light and have so little drag that one day a flight from New York to Tokyo might take only 5 hours instead of 13? How can we design medical implants that are biocompatible and don't wear out during a patient's lifetime? How can we make mountain bikes that are easier to carry over streams? How can we safely store nuclear waste for 10,000 years or more?

The answer to all of these questions is: use metals more effectively!

From a Samurai sword to a steel I-beam to electrical wiring, metals are part of our past, present and future. Metals are the most common elements in the periodic table and are characterized by malleability, ductility, high electrical and thermal conductivity and a shiny surface that reflects light. Metallic bonding where valence electrons are shared by the entire solid gives rise to the "free" electrons responsible for electrical and thermal conductivity.

Most metals and alloys (combinations of metals) are also highly crystalline, which is the key to their ability deform plastically and to resist failure under repeated mechanical loading—good examples of this are the alloys used in aircraft that can compensate for deformation in high-speed flight, or skyscrapers designed to bend in the wind.

When approaching the nanometer scale, in which electrons behave like waves and surface effects are important, metallic materials acquire intriguing properties. For instance, silver nanoparticles are yellow and gold nanoparticles are burgundy. These new optical properties are interesting for sensing and communication technologies.

How is MSE working with metals?

MSE professor Oded Rabin and his research team use silver cubes 100 nanometers (1/10000000 m) in size to detect molecules. With the cubes, signal can be identified with just ten thousand molecules. Without the nanocubes, ten billion molecules would be needed.

MSE professor S. Ankem has studied the deformation of titanium alloys and other metals that occurs over time, an effect called "creep." Predicting creep or getting it under control with new manufacturing techniques could lead to reduced failure rates and improved performance in everything from golf clubs to aircraft landing gear.

Shape Memory Metal: Shape memory materials display an unusual property of "remembering" the shape they were formed into at high temperature. They experience a solid state phase change, in which atoms are rearranged, but the material remains a solid. If a piece of shape memory metal alloy wire is deformed, for example, it will return to its original state when exposed to the heat of a hair dryer—the heat triggers the "memory" of where the atoms were at the time of its production.

Amorphous Metal: An amorphous metal is an alloy combining elements of differing atomic diameters. The dark grey disk (left) is an amorphous metal formed by combining 5 different atoms together: zirconium, titanium, copper, nickel, and beryllium (Zr41.2Be22.5Ti13.8Cu12.5Ni10.0). The differing atomic diameters and unusual composition prevents the atoms from arranging in a regular crystalline structure. The atoms have no easy way to slip by each other under deformation, resulting in a very hard material. When a steel ball bearing is dropped on the amorphous metal, it does not permanently deform and the ball bounces many times before coming to rest.