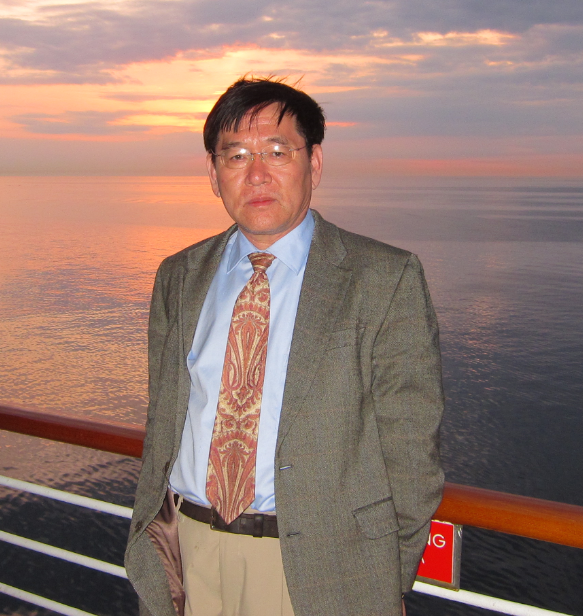 Don’t ever give up... a single successful test makes all of the failures worth it!

Tony Ying (Ph.D. '94) grew up in the center of Beijing. His mother worked hard, but struggled to keep her three children fed. Yet, she insisted they work hard in school – attending University was a given – but Ying never imagined he'd earn a doctorate and go on to have a successful career in the United States. Ying served as a materials engineer at the U.S. Mint in Washington D.C. for near 20 years, but getting to that point wasn't easy.

"I attended the best middle school in all of Beijing, but during the Cultural Revolution, Chairman Mao [Zedong] ordered all higher education institutions to be closed," said Ying.

After 1966, Chinese academics had few other options apart from working on farms or in industrial plants, including Ying. He made the best of it. During the day, he worked sheet metal in a small machine shop, and at night he stayed at work to learn how to operate all of the metal cutting machines, such as lathes, mills, grinders, etc., which provided a strong base for his future education and career. After the death of Mao in 1976, Universities started opening again all over China.

"Everyone wanted to enter University at that time, but you had to pass the entrance exam," Ying said. "I took it and passed, and then enrolled in Tsinghua University, which was the top school in Beijing at the time. I was happy to attend, but at 28 years old, I was much older than most of the other students – some of my classmates were only 16 – which was a bit daunting."

Ying graduated with a degree in mechanical engineering in 1983 and continued on to graduate school. At age 35, he got his master’s degree in tribology, and began teaching shortly thereafter. Ying thought he was done with school, however, his advisor, Professor Wen, recognizing his passion and talent, encouraged him to go for a doctorate while simultaneously teaching a tribology course. Dr. Wen also informed Ying that he had contacts at the National Institute for Standards and Technology (NIST) in Washington D.C. who were also conducting research in tribology at the time. Wen encouraged him to move to the U.S. to work on his Ph.D. thesis, and then return to Tsinghua University for his defense, and pursue a professorship afterwards.

"My plan was to return to China in September of 1989 to complete my Ph.D., but the Tiananmen Square incident put a halt to those plans," Ying said. “Many young Chinese students were killed. Unarmed protesters faced assault rifles and tanks everywhere. After that, I felt so disappointed that I wasn't keen to return to China. I discussed the situation with my wife – we could return to China where I would be a professor and have a relatively comfortable life as long as we didn’t speak out against the government, or we could stay in the U.S. and start over. I was nearly 40 years old at that point, so this was not an easy decision."

Believing in the American ideal that everyone is created equal, and allowed to live free, they decided to stay, convinced that by working hard and contributing to society, the ‘good life’ would be the reward. Although none of his doctoral credits from China transferred over, Ying persisted, determined to finish his Ph.D. Through his NIST supervisor, Dr. Hus, Ying became acquainted with Manfred Wuttig, a professor of materials science and engineering at the University of Maryland (UMD), who would later become his Ph.D. advisor.

"I knew that UMD had the best engineering program in the D.C. area, so I applied and was accepted," Ying said. "Once again, I was taking courses where my classmates were half my age – it was very hard for me and I noticed my memory wasn't as strong as it was in my 20s – but all the professors were so patient, and my classmates were so friendly and helpful, so I pushed my doubts aside, and focused on my work." When he wasn't in class, Tony was interning at NIST.

In 1994, at age 44, Ying finally received his Ph.D. in materials science and engineering, and found himself, once again, on the job hunt.

"I was starting over – again – but I had to laugh about it – it was par for the course at that point!" said Ying. He worked as a postdoc at the University of Illinois, Chicago, for a time, and later found a permeant research position at Gillette Research Institute located at Maryland.

Having a background in materials and lubrication, he worked to improve the performance of the Mach III razor. The goal of the project was completely different from all of his previous work – instead of protecting the metal cutting tool, he was now charged with protecting the skin from metal and answering questions like, “How was the skin nicked while shaving?” “Why did grandpa apply soap to the skin before shaving?”

“At UMD, I took a course taught by Professor Rob Briber, [now dean of the Clark School],” said Ying. “He taught me that a water soluble long chain polymer is a good lubricant to replace soap. By combining elasticity knowledge learned at Tsinghua University, and polymer knowledge learned at Maryland, a new prototype of razor was developed, offering almost no nicks during the clinic testing!”

Later on, the Gillette Research Institute moved to Boston, so Ying accepted a job at the U.S. Mint instead and there he remained for nearly 20 years.

One of Ying’s projects at the Mint was to coat a hard protective layer on coining dies, which are used to stamp U.S. coinage. "What I learned in Professor Isabel Lloyd's ceramic's course came in handy at that point," Ying said.  “We discussed chemical vapor deposition (PVD) process in which a gas, methane for example, can be deposited onto a solid surface to form a hard diamond layer.” This discussion opened his eyes to new technology in the materials field.

Prior to 2010, the surface of coins were subject to lots of scratching due to small dust particles in the air getting trapped between a die and a blank coin during the stamping process.

“The metal radially flew from center to edge, and the hard particles with the plastic movement of the blank scratched the die surface,” Ying explained. “As a result, the scars were copied from die to the next coin. The longer the die was used, the more scratches were seen. To solve this problem, we applied a very thin, protective layer, which was harder than the small particles, to the die surface. As a result, no starburst scars were found on proof coins after 2011. They look flawless!”

A second major project for Ying was extending the life of coining dies. Due to poor lubrication, the average coining die life was 120,000 to 150,000 strikes. Ying thought that could be improved.

“To create a good coining lubricant, the molecule needs an active function group that can react with a metal surface, and stay there, in addition to a long polymer chain,” Ying said. “Dr. Briber taught us that many polymers have different acceptors and donors. Via chemical reaction, the molecule with a function group may link with a long chain polymer to form a new single molecule. Based on this concept, I contacted a chemical company who agreed to make a new lubricant molecule with the required structure. We tested the new chemical and it immediately showed an advantage.”

After the new lubricant molecule was created, next step was how to apply a monomolecular layer on metal surfaces. Ying partnered with his NIST colleagues for the project, resulting in a novel monomolecular layer that could be applied to coin surfaces.  Not only to coins keep their shine, but the die life increased from 150,000 strikes to nearly half a million strikes – a 300% increase! This new technology saves the Mint over $2M every year.

“The contributions I made during my career would never have happened without the courses I took at UMD,” Ying said, “I will always be thankful for the education I received there.”

After making such a remarkable contribution, to science and to the American people, Tony retired from the U.S. Mint and moved California to be closer to his son and granddaughter.

So, do you have any regrets in this rollercoaster we call life?

"I have only one regret - not having enough children!" he laughed.

Ying's dreams, however, are far from over. He still aims to travel around the world, Europe in particular, to study art, philosophy and history.

"I also want to continue developing the monomolecular material to protect the silver coins and silverware," said Ying. "They still tarnish too easily, so after I retired, I developed a newer monomolecular technology to keep silver products from tarnishing. Half of a coin was coated with a monomolecular anti-tarnish layer. After an accelerated sulfurization test (equivalent to five years of atmospheric exposure) without protection, the silver surface turned dark brown and blue. With the coated side, however, the silver surface maintained its pre-test condition. My goal is to have this technology used in the silver industry and others in the near future!

So, any words of advice for current and incoming students?

Don’t ever give up. I’ve had countless failures in life, but a single successful test makes all of those failures worth it! Work hard and learn as much as you can – never stop learning – and trust the science base learned at school. If you have to go back to the proverbial drawing board, time and again, so be it. Just don’t quit.