Combinatorial synthesis is a newly emerging paradigm of research methodology which aims to drastically increase the efficiency at which new materials are discovered and improved.  Using this technique, up to thousands of compositionally varying samples are synthesized, processed, and screened in a single experiment in order to rapidly survey large materials phase spaces. Associate Professort Ichiro Takeuchi and his research group are actively involved in the combinatorial approach to materials and its applications to a variety of materials systems. The materials systems of particular interest include magnetic materials and smart materials. 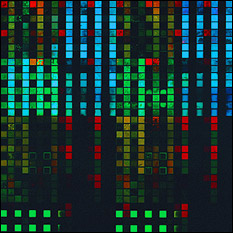 New materials tend to have increasingly complicated structures, often consisting of a large number of elements.  The combinatorial techniques can be used to address materials issues at different levels in a wide variety of topics ranging from semiconductor manufacturing and thin film smart materials to catalytic powders and biomaterials. It is widely anticipated that combinatorial approach to materials will lead to accelerated innovation in various industries broadly benefiting our society.

Takeuchi's combinatorial research effort has previously been a significant component of the NSF funded International Materials Institute on Combinatorial Sciences and Materials Informatics Collaboratory. It also plays a key role in exploring new multiferroic materials, which are being pursued under NSF MRSEC.