Research doesn't always have a "happy ending," but that does not necessarily diminish the importance of a dead end.

Clark School Department of Materials Science and Engineering (MSE) adjunct professor Maija Kukla (National Science Foundation) is a leader in the field of computational materials research. Her group, which is currently focused on improving the performance of solid oxide fuel cells (SOFCs), uses advanced simulation and modeling techniques to obtain information about the behavior of materials that is difficult or impossible to acquire through physical experimentation alone.

For years, Kukla, like many other scientists, has been studying barium strontium cobalt iron complex perovskites (BSCF), a class of oxide materials considered frontrunners for use in SOFC cathodes, where a complex series of chemical reactions converts chemical to electrical energy. Perovskites have been an attractive option because their crystal lattices are flexible, allowing them to be customized by the incorporation of practically any chemical elements, and suggesting they would hold up under repeated cycles of charging and discharging. The hope was that the BSCF perovskites' flexibility, derived from four metal sub-lattices within their cubic arrangement and coupled with the fastest oxygen chemistry known to oxides, would enhance the SOFC cathode performance under specific operating conditions.

"BSCF is very complex," says Kukla, "but its flexibility gives you a lot of opportunities to design a material the way you want it. You can make your lattice a specific size, for example, which is an important factor in energy conversion, but you have to pay a price. Everything is about a tradeoff."

What Kukla and her colleagues discovered in the molecular "fine print" of the deal turned out to be more serious than anyone had imagined.

"The tradeoff for this material," she explains, "which was predicted to be the best material, a panacea for energy conversion–we discovered that it's unstable." This was not the sort of revelation researchers dream of announcing, and at first, the news was not well received.

"We closed the field," Kukla says. "There was shock in the [SOFC] community, not only because nobody expected it, but because people were very excited about this material and a lot of research money was invested in it. So now, imagine one of us standing up at a conference and saying, 'Look guys, this material is actually never going to work.'"

Following an initial flurry of disbelief and disappointment, the results were accepted. People became "respectfully excited" again, Kukla explains, because while BSCF perovskites had been declared a dead end, her research explained why, which provided insight on how a good fuel cell cathode material should work, and how it should be designed. Her group also proposed another perovskite material, LSCF, as a better option. LSCF is now being actively studied around the world.

And what about the fate of BSCF complex perovskites, the former fuel cell materials star? It's not all bad news, Kukla says. They can be used in other, less demanding energy applications, such as gas separation membranes that reduce CO2 emissions, in which it is easier to mitigate their instability. 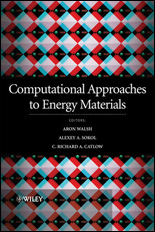