Three students from Department of Materials Science and Engineering (MSE) have been awarded 2012 Graduate Research Fellowships from the National Science Foundation (NSF). Each highly competitive Graduate Research Fellowship consists of three years of support that may be used over a five-year period. For each year of support, the NSF provides a stipend of $30,000 to the fellow and a cost-of-education allowance of $10,500 to the degree-granting institution. Fellows are also granted access to TeraGrid, the NSF's open scientific discovery supercomputing infrastructure, and have the opportunity to take part in professional development activities.

Post-baccalaureate student Olatunji Godo (B.S. '11) has been active in research throughout and following his undergraduate studies, starting with a project for MSE professor Gottlieb Oehrlein in which he analyzed X-ray photoelectron spectroscopy data to broaden the understanding of material modifications during plasma processing. More recently he has worked on a project led by professors Sheryl Ehrman (Department of Chemical and Biomolecular Engineering) and Sameer Shah (formerly of the Fischell Department of Bioengineering) in which he fabricated and characterized biocompatible iron nanoparticles for use in the early diagnosis of neurodegenerative diseases. Left: Olatunji Godo working at a transmission electron microscope at the Nanoscale Imaging Spectroscopy and Properties Laboratory.

Outside of class, Godo has been a mentor for high school students in nanotechnology and robotics programs, as well as a tutor on campus for his fellow college students. He will be heading to graduate school in Fall 2012, and is in the process of choosing which program to attend. His ultimate goal, he says, is to "make significant contributions to the scientific and engineering communities in the emerging field of nanotechnology, especially its applications to medicine."

"Tunji impressed me with his high motivation, enthusiasm, openness to suggestions, and his determination to enhance his research experience by exploring on his own topics related to the work in my lab," says Oehrlein.

Senior Eric Epstein works in MSE assistant professor John Cumings' group, where he collaborates with graduate student Khim Karki on an investigation into the electrochemical properties of silicon nanowires as they undergo charge and discharge in lithium ion battery cells. Silicon anodes have great potential for use in lithium ion batteries because they have ten times the capacity of carbon anodes, but they tend to fracture. Epstein and Karki are working to document silicon's exact failure mechanisms, and are also exploring its potential to self-heal. Left: Eric Epstein (at left) working on an Engineers Without Borders bioretention facility implementation on campus.

Epstein got his start working for Cumings as a participant in the UMD MRSEC's Research Experiences for Undergraduates program, and his experience enabled him to obtain a position conducting similar research for the Naval Research Laboratory. He is still in the process of determining where he will attend graduate school, and says his top choices include Cornell and the University of Illinois at Urbana-Champaign. He would like to specialize in optoelectronics, photovoltaics, and batteries. "I hope my work has a major impact in developing renewable energy technology that is practical," he says. Outside of class, Epstein has been a self-described "avid" member of Engineers Without Borders.

Current graduate student Hanna Nilsson, also advised by Cumings, focuses on characterizing the thermal contact resistance and thermal conductivity of carbon nanotubes using an in situ transmission electron microscopy technique called electron thermal microscopy. Estimated at up to 6,000 W/(mK), carbon nanotubes' theoretically high thermal conductivity should make them ideal for heat management in small-scale electronics, but experimental measurements have shown much lower values because of the tubes' thermal contact resistance. Nilsson's goal is to characterize this property and determine how it might be controlled, paving the way for the material's broader use in electronics. Left: Hanna Nilsson.

After completing her Ph.D, Nilsson plans to pursue a career in academia, where she can pass on her fascination with atomic scale physics principles to the next generation of students. She chose to attend the University of Maryland for her graduate studies, she says, because of its unique combination of a large campus offering top-notch research facilities and MSE's small department size, which allows students and faculty to build strong relationships.

"I could not be more proud of Eric and Hanna's success," says Cumings. "It is a testament to the quality of the students and the quality of our programs." Another member of the Cumings Group, Department of Physics graduate student Jasper Drisko, received an Honorable Mention from the NSF. For More Information: Visit the NSF Graduate Research Fellowship Program web site » 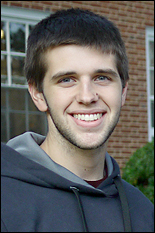 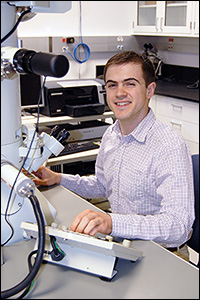 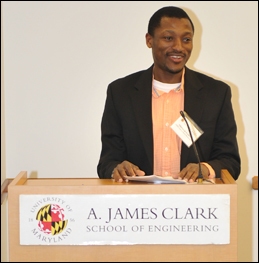 Epstein Named One of UMD's Undergraduate Researchers of the Year 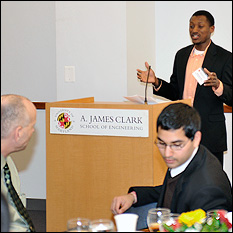 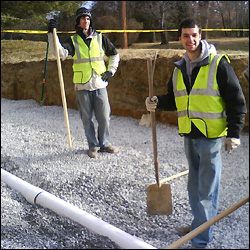