The National Institute of Standards and Technology (NIST) has awarded a five-year cooperative agreement totaling $15 million to the Maryland NanoCenter at the University of Maryland to develop and implement a Postdoctoral Researcher and Visiting Fellow Measurement Science and Engineering Program. Department of Materials Science and Engineering assistant professors John Cumings and Oded Rabin are among the co-PIs of the project, which is led by PI and Department of Physics professor Daniel P. Lathrop and also includes co-PI and Department of Electrical and Computer Engineering assistant professor Edo Waks.

The award extends and expands an existing cooperative agreement between the two institutions that was begun in 2006 with a $1.5 million competitively awarded grant. The program for postdoctoral researchers and visiting fellows is one of many collaborative efforts developed between the institutions since they signed a broad agreement in 2003 to expand research collaborations and professional linkages.

According to NIST, this new award will provide as many as 100 researchers with one- to two-year appointments at the NIST Center for Nanoscale Science and Technology (CNST). Visiting researchers supported by the cooperative agreement will aid in the development of measurement and fabrication methods, standards and technology in a wide range of areas including future electronics; nanofabrication and nanomanufacturing; energy transport, storage, and conversion; and bionanotechnology.

"We are very pleased to have this latest NIST-CNST agreement," says Lathrop. "Nanoscience cooperation between the University of Maryland and NIST has never been stronger."

In addition to providing new research opportunities for U.S. industrial, university, and government scientists, the funding will provide training for the next generation of nanotechnologists by providing recent Ph.D. recipients postdoctoral research opportunities to work under the mentorship of CNST project leaders and have access to a state-of-the-art nanofabrication facility, the CNST NanoFab. Under the terms of the cooperative agreement, the University of Maryland will identify candidates for the available research projects based on cooperatively developed criteria. The positions will be open to all qualified applicants.

The two institutions also collaborate through the Joint Quantum Institute on quantum science research, and through the UM-NIST Center for Nanomanufacturing and Metrology, a joint venture created to advance the science and technology of manufacturing products at the nanoscale (one billionth of a meter). In addition, Maryland researchers have numerous individual partnerships with NIST researchers in a variety of areas including nanomaterials fabrication and nanoscale characterization.

Story courtesy of and adapted from the the original press release by Lee Tune, Associate Director, University Communications. 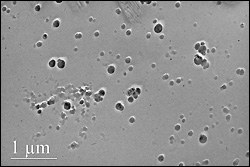